A Daring Adventure or Nothing At All...

As my season in Pennsylvania comes to a close, I now find myself on the Pacific coast of Washington touring with Dannah’s tween show, Secret Keeper Girl. We will be putting on six shows for moms and daughters sharing truths from God’s word. WOW.

I can honestly say that eight months ago when I was lying in the fetal position on the floor of my bedroom considering how on earth I was going to even get up… if someone told me I would be here doing this I would have said they were an idiot.

The life of faith inevitably involves risk. I daresay that if there isn’t a risk involved, you may not be experiencing faith.

By definition, faith is; complete trust or confidence in someone or something.

Helen Keller once said, “Life is a daring adventure or it is nothing at all.” I like to agree with her! Loving adventure myself, I scuba dive, skydive, white water raft, bike, swim with beluga whales and dolphins… my next bucket list adventure is to swim with whale sharks!

But this daring adventure you and I are on is so much more than earth-experiences. Jesus wants it to be about faith. About miracles. About an eternal mission. 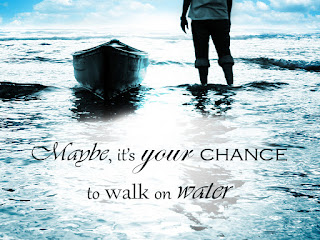 For the past couple weeks, I have been stuck in Matthew 14:22-33 – the story of Peter walking on the water. Granted I have read and heard the story a thousand times but never “got it” until this week.

As I was reading along about the great faith it took Peter to step out of the boat… blah blah blah…. I read the story like I would read the back of a cereal box. Then the Lord smacked me in the face! HELLO, HEATHER!!!!

There is a HUGE cliffhanger in this story…. Have you ever seen it?! Peter recognizes the wind and waves (his circumstances) and begins to sink. Jesus reaches out a hand to him and asks, “Why did you doubt?” Then they get back in the boat. The end.

Ummmm, excuse me, but What Happened?! Did Jesus pull Peter back up to a standing position on the water? Did He walk on the water back to the boat while Peter swam? Did Jesus turn into a lifeguard and drop down throwing an arm around Peter and drag him to shore? How did they get back in the boat?!?!?!

Since my world took a radical turn in late February, I have been faced with many “out of the boat” moments. Some which I took, and others which I stayed safely in my life raft and waited for Jesus to come and get me.

Jonah still on my heart too, I contrast his call with the charge of the disciples. Jonah was told by God to go somewhere and do something. He didn’t. Instead he ignored God’s voice and turned his back. He was thus disciplined – thrown overboard and had the pleasure of hanging out in the bile pool of a whale. Ewww.

The disciples on the other hand were sent out on a mission too. They did not want to go without Jesus, but were obedient. Jesus knew it was essential for their faith to grow. Between 3am and 6am they began to battle the waves. Fear set in as evidence of the Lord’s presence appeared absent. However, it’s never absent!

Might I point out, it was Peter’s idea to walk on the water. He presented the great plan to the Lord. Jesus agreed. Peter asked for a command – Jesus said one word, “Come.” (When I ask the Lord for direction or a command, I am often unsatisfied with one-word answers; “Go, Speak, Write, Love, Forgive…) I need to know why and how. Peter was content with one word = challenge for myself this week!

Although many scholars criticize Peter, I am left in awe. His faith was large. He asked to go and Jesus said come. When Jesus gives a command, you better obey! At that moment, Peter was far safer on the water than in the boat with the others.

Notice the storm didn’t stop when Peter got out of the boat. This is in the dead of night, sheets of rain falling, waves crashing, boat rocking, cold, wet, tired, sore, frustrated… then Peter walked to Jesus – while all of this was still going on!

We ask God to do things – to give us faith – to help us grow. Then, when He does, we are shocked. Peter freaked out. He remembered who he was: a fisherman. He remembered where he belonged: in the boat. He thought, “this is impossible, I shouldn’t be doing this,” even though it was the very thing he asked to do!

When we start sinking, there is not a whole lot of time for a long prayer. “Lord, save me!” is all the poor guy had time to get out! And Jesus reached for him. I like to imagine Him eye rolling and smiling; much like a father would when his little girl gets stuck on the monkey bars. Daddy to the rescue!

In this moment, I am sure Peter was not only scared and in shock but humiliated. Eleven other dudes were watching with their mouths hanging open from the boat. I like to think that Jesus brought him back up to a standing position and together they walked back to the boat = then the storm ceased.

Often times Jesus responds to us in accordance with the measure of our faith. He doesn’t set us up for failure and He answers us when we cry out to Him. I like to think that the Lord “picked him up and dusted him off” and together they faced the others.

Sometimes the walk back with Jesus is humbling… I am sure Peter was saying things like, “Uh, thanks for saving me. I am so sorry! I won’t pull a stunt like that again. Please get me back to the boat.” Can you imagine the conversation when they got back in the boat?!

The times I have stepped out of the boat, I become much like Peter; growing in faith and walking on the water, until… I look around and remember where I am and what’s going on and the reality that I am terrified and that it is impossible for me to be doing what I’m doing… I begin to sink into fear and doubt and the vision of Jesus’ precious face becomes blurry.

I admit that facing my hometown during the holidays has been one of those sinking things. Memories, traditions, our anniversary… people who know, people who ask. I wasn’t happy about it in the first place, planning to hide out in my house to avoid the possibility of having to face the situation.

However, a prayer I did not fully consider was, “Lord, I will speak and share my healing with who ever, wherever.” That same week I was contacted by two schools in my hometown asking me to come share with their high school kids… “Ummm, Lord, I meant anywhere but there.”

I don’t want to be like Jonah. Being vulnerable in front of strangers is hard enough but in front of friends, family, wedding guests, and people that proudly and excitedly hung the save-the-date from their refrigerator is another story.

The potential for sinking here is great, however, I know not to take my eyes off Jesus. He has beckoned me out of the boat. Asked me to do what I consider the impossible.

What has the Lord asked you to do? Is it a one-word command that you are still trying to mull over and think about? Your faith is shrinking….

It is like a little kid determined to jump off the high dive because their Dad said it was ok. They proudly race up the stairs – then they stand on the edge and look down. Although Dad is treading water waiting to catch his son, the child begins to shake. Tears fill his eyes. He shakes his head back and forth… I can’t do it. The Dad yells up encouragement. But, the longer he stands on the edge, the more scared he becomes.

JUMP! Get out of the boat. If you are headed toward Jesus, you are moving in the right direction. If you can’t see Jesus, you might be like Jonah taking the smelly scenic route to your destination – you are missing a lot along the way. The view isn’t nearly as great, nor is the chance for faith-building.

Don’t wait, don’t think. When Jesus says, Come, Go, Write, Forget, Think, Forgive, Pray, Serve, Love… you had better do it and do it fast. Notice that 11 others had the same opportunity to get out and walk and they didn’t. That’s why the story is about Peter.

I want my faith life to be an adventure – not nothing at all (or one with a whale belly.)
Posted by Unknown at 10:55 AM