I remain in the waiting. It's amazing how a simple knee surgery has turned in to life-threatening blood clots, pulmonary embolisms, and a possible cardiac diagnosis. And I thought this surgery would be easy! At the present time I have five phone calls in to doctors awaiting answers. My return to work is still in limbo. My heart is tired. And I don't understand the purpose of this trial, yet. I'm still marching around my Jericho. 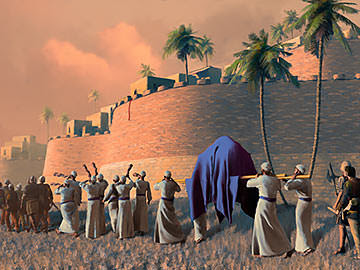 Earlier this week, my mom and I were studying Joshua's conquering of the great city of Jericho as found in Joshua chapter 6. Moses is gone and now Josh is the man in charge. His first task is no small one: It's to defeat the great, fortified, powerful city of Jericho. Jericho - as in the first walled city in history. The Israelites had never seen anything quite like it. Scholars and Bible researchers believe the walls totaled seven stories high. (That's about 70 feet.) Can you imagine what the Israelites felt like that the base of those walls? Small, weak, insignificant, incapable, scared - probably.

What struck me was verse two, "See, I have given Jericho into your hand, with its king and mighty men of valor." Next came the marching orders and how on the 7th day they were to blow their trumpets and give a great shout and watch the walls will fall down flat, giving Israel victory over the city.

But, at that point, nothing had happened yet. No victory. No organization of the army. Nothing. And the Lord says to Joshua, "SEE?"


[See: perceive with the eyes or discern visually]

No, Lord. I do not see. Quite frankly, I see a 70 foot wall. I see an army that makes me feel intimidated. I see the fear in the men I am leading. I see how impossible this situation looks. I don't even begin to see a victory yet!

Unlike me, Joshua didn't negotiate with the Lord. He confidently set about and followed the Lord's instructions. While he did not SEE the victory with his physical eyes, he could perceive it through eyes of faith.


Joshua's confidence was a decision based upon what God had done for him in the past.

Joshua was there when God parted the Red Sea. He saw manna fall from the sky. He was familiar with the cloud and pillar of smoke. Joshua watched water gush from the rock. He saw the glow of Moses coming down from the mountain… He was well aware of God's goodness and faithfulness to him and to the rest of God's people. If you stop and think about it, I bet you've seen God's faithfulness in the past too.

By faith, Joshua showed up to the battle. He followed the instructions and trusted God's timing. The unconventional battle style gave God 100% credit for the victory. I have found that more often than not, the God of this universe is moved to action by our faith. All He wants is our trust and obedience to show up, so He can show off.

What is your Jericho? The impossible situation that you can't possibly conquer without the hand of God? Maybe a medical diagnosis. Depression. Addiction. Fear. Concern for a loved one. A marriage on the rocks. Bills that stack higher than your income. A broken family. Abuse... If you're human, you have one. Keep marching around it, trusting God to move.


We must learn to march in quiet obedience.

There was to be silence during the march; except for the trumpets. We don't need to talk about how impossible our situation is. Or how crazy we think Joshua is for making us do something so dumb. Or how tired we are of walking. Or how scared we are. Or how long we've been at it. The command for quiet was for their own protection against the enemy of Satan. Quit talking about your Jericho for the world to hear. Quit posting it on social media. Quit confessing with your mouth how unhappy you are. Don't give the enemy a foothold like that! March quietly and obediently as you reflect on His goodness to you in the past.

Don't panic if you don't SEE the victory yet. Through your physical eyes, you will only see the impossibility of it all. As believers, we work every day to view life through eyes of faith. Eyes that see with eternal perspective what is possible by the hand of God. Activate your faith eyes to SEE. Rather than fear, act with confidence that demonstrates faith in God's plan for your life - and His plan for your Jericho.

You may not see it now. The walls of your Jericho will fall. Hang on to the promises found in God's word. It may look majorly unconventional to you, even downright crazy at times, but the design of it all is that 100% of the glory for your victory goes to God.

Victory only comes by God's power.

Until then, keep marching around your Jericho. Obedient, hopeful, quiet, full of faith in God's goodness. Victory doesn't come by your worrying, striving, trying, manipulating, conversing… So, give it up. Chill out. Choose to SEE through eyes of faith. God is faithful. He will surely do it. Keep marching.  Wait and SEE.

Do I have a valid reason for not keeping my blog active? NO. So, I won't even try to defend myself and just admit that I have avoided writing and have avoided God's tug at my heart with a vengeance. There is no explanation… I just finally had enough nights in the belly of the whale and here I sit, begrudgingly obedient: 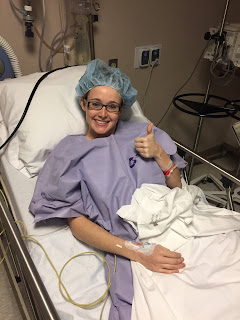 I find myself in another season of trial. Two weeks ago I went in for a routine arthroscopy of my left knee. The surgery was successful and I was home the same day. Three days later is when the calf pain began. Tests showed a blood clot. Then the blood thinners. Then the clot was gone and we stopped all meds. I still felt terrible. CT scan showed the clot blew and I am now dealing with five pulmonary embolisms in my right lung. Tests will continue to determine the cause of it all. I have been married to Fireman for only ten months... (Boy, he had no idea what he was in for, did he?)

He sat with me on the couch one night after a particularly long and difficult day at the doctor's office. "I am so tired of these attacks," he said. "Satan, you have no place in our home. You leave us alone in the name of Jesus." While I am thrilled that my husband spiritually leads and fights for our family, I was somewhat surprised at my own response to his prayer. "Sweetie, sometimes it's not the enemy… sometimes it's God."

I sat and processed what I had just said. I was quickly reminded of the story of Jesus walking on water in Matthew 14. 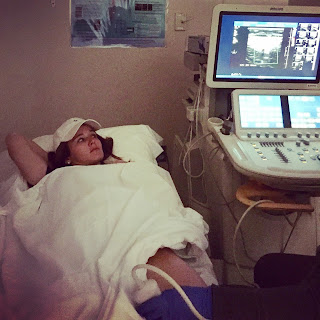 "Immediately (after He performed the miracle of feeding 5,000) He made the disciples get into the boat and go before him to the other side, while He dismissed the crowds."
HE MADE them go.
Kinda like when your mom MADE you wash your hands before dinner. Remember, it wasn't a choice - it was a command. There was no wiggle room for the disciples on this one. It would have made far more sense for the disciples to stay and dismiss the crowds and allow Jesus to escape, but noooo, Jesus always knows best (and often does the opposite of what makes sense to us.) He decided instead to dismiss the disciples from the miracle and send them on an adventure to the boat.

You'll recall the story. The boat ends up far from the shore and is beaten by the waves and wind working against them. This was no pleasure cruise. The disciples were all awake - all hands on deck - working to keep the boat moving the right way. Meanwhile, Jesus was up on a mountain, overlooking them, praying. I imagine He was praying for them.

Sometimes the storm that you find yourself in is a God-SEND. Nope, that's not a typo. God was the one to SEND you into it. There is something He desires to grow in you. There is a part of your faith that wouldn't come alive if you were on the mountaintop. 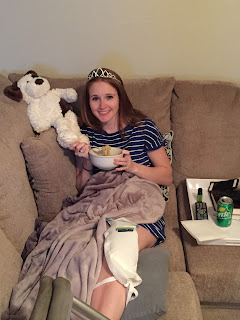 Often times, when bad or difficult situations come up in our lives, Christians are quick to blame them on the enemy. Caution: that's not always the case. Sure, the devil has tried to take elements of this trial and plant fear, doubt, miscommunication, etc. just to stir the pot. But, without a doubt, I am 100% confident that the Lord is the one who sent us in to this one. His presence has been so evident through it all. Never once have we felt abandoned.

The disciples seemed to have the storm under control. Kinda like us, huh? We've got this! They were seasoned fishermen. They had worked the waves before; and by-golly, they were handling it just fine! Fear didn't sink in until they saw a ghostly figure approaching them in the darkest hour of the night. (Let me also point out once again - the terrifying ghostly figure wasn't Satan!) It was their LORD! When things get even darker and scarier, keep your faith. That's often where Jesus shows up.

When Jesus walks on the water toward the boat is where we encounter the courageous story of Peter stepping out of the boat and walking on water with the Lord. GO, PETE!!! But then what happens next is the largest miracle of all to me:


Jesus gets in their boat.

Jesus is willing to climb into your boat too. Whatever your mess, whatever your struggle. Admit that you "don't got it" on your own. It tends to speed to process. He won't pass you by, deeming your mess too much for Him to handle. He is the I AM. Your Healer, Provider, Safety, Strength, Courage, Joy, Lover, Friend, Father, Teacher, Shepherd…. What do you need? He IS that for you.


By an act of faith, recognize that sometimes He allows these tough things to come our way.

I am confident the disciples got off that boat as changed men! The scripture tells us they recognized Jesus as, "truly the Son of God." They saw Him for who He really was. I am sure they had more than a few stories to tell! It's not every day you see a dude walking on the water… let's make that two dudes walking on the water. Oh, ya, and that crazy storm that stopped once Jesus' sandal touched the floor of that boat! You had bet the disciples were talking!  And, I'm pretty sure they were different men for having been in the boat that night.


In exchange for the storm, God gives us a story. 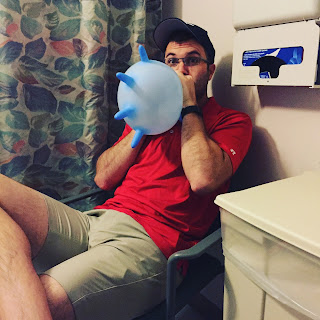 I believe that some of you are in a God-SEND trial right now. Trust that He remains on the mountain interceding for you. You are never out of His sight. Trust that at just the right time, He will come to you. He will reveal Himself in a mighty way. And HE will climb into your boat and get you to the other side as a better and stronger version of yourself.

If Jesus directed you into the storm, be confident that HE will get in your boat and steer you safely to your next destination. Hang on to your faith and quit blaming the enemy for the very thing that God is allowing to strengthen you and reveal Himself to you. Satan should never get that much credit…. Sometimes it's God.
Posted by Unknown at 6:47 PM 3 comments: