When Your World Is On Fire

On April 13, 2012, I was crowned Miss Sierra Blanca and began preparations for the Miss New Mexico Pageant. Ironically, in early June, lightning struck the mountain of Sierra Blanca… void of moisture and strengthened by heat and high winds, my namesake mountain was quickly engulfed in flames. 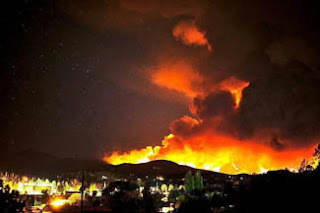 From my hometown 80 miles away, we watched smoke billow down the mountain and fill the Pecos Valley. Over 200 structures were destroyed in the blaze that burned out of control for nearly a month.

My family has had a cabin in this region for 20 years… the flames came within a mile and a half of our home. Driving up to the mountains following the fire was gut wrenching, the devastation visible for miles.

My mountain was on fire… my life was on fire. On February 28, 2012, lightning struck my world in the form of a text message. Instantly I watched my love, my hopes, my dreams, my job, my home, and my future go up in flames.

Fire is destructive. It is hot. Painful. Unpredictable. Insatiable. Deadly. Yet, we are enthralled by fire. Consider the 4th of July… a holiday known for explosives! A friend who lives on Sierra Blanca sent me the above photo. I was awestruck by the beauty of the fire. For a moment, I forgot that people were losing their homes and livelihoods in the lethal blaze. Being a visual learner, the Lord continued to teach me. Fire hurts and impacts those who experience it, but when something is on fire, others often gather to watch it burn.

For the last nine months my world has been consumed by a fire that countless people have gathered to watch. Honestly, I feel like a goldfish! A woman I deeply admire recently lost her husband to cancer.  She told me that “Often, tragedies like ours have a way of placing an unwanted spotlight on our life.” She was correct!

Fires are necessary though… they burn off what is dead and useless, they enrich and refresh the soil, and they make room for new growth. Pleasant, no. Painful, yes. Essential, sometimes.
The damage up on the mountain is bone chilling. Structures demolished.  Trees appear as only black toothpicks on the charred ground. Wildlife deceased or at the very least, displaced. It will take years for the mountain to heal, but when it does, it will be more lush and beautiful than before. 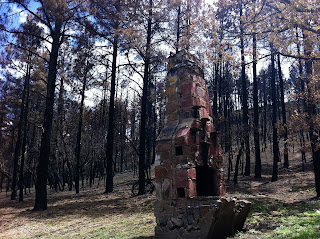 This week I was privileged to share my testimony with one teen bible study and two Christian schools in my hometown. I guarantee you that was not on my list of things to do while home for the holidays. Actually, my plan was to hide out in my house. I didn’t want to run into people who ask questions; people who want to tell me what he is doing now; family and friends who dance around the “are you really ok’s?” Not gonna lie, it has been much easier to put 2,000 miles between the memories and myself.

However, the Lord had plans to take me out of hiding. The very week that I was dreading my return to my small hometown, both schools contacted me asking me to speak to their teens. I had told the Lord I would share my testimony wherever He asked me to. I should have clarified. I meant anywhere but here.

I was afraid of what people would think. They know me. They know the situation. The very people watching me burn were asking for a fire report. Thankfully, the Lord directed my testimony. While talking points of the three speaking engagements were the same, each was very different.

Revelation 12:11 says, “We overcome by the blood of the Lamb and the word of our testimony.” I wanted to overcome. I know I am covered by Jesus’ blood and redemption; I needed to share my story. It went a little something like this:

Ever receive a participation award/trophy or ribbon? They are kind of annoying when you think about it. I would much rather have a 1st place trophy! My generation is especially used to instant gratification; instant rewards; meaning that we don’t try very hard and are quick to give up.

James 1:2-4 states, “When trials come…” Not if, when. Yet, we have trials or losses come into our lives and we are shocked, surprised, and decide to quit. Many championship teams have a loss or two under their belt. What if after that first loss, the whole team threw in their towels and equipment and quit, blaming the coach for the loss? Would they ever go on to win a championship? No! They would settle for a participation ribbon rather than a championship trophy.

Losses and “hard games” will come, but they cannot be an excuse for us to get mad at the Coach and quit. I shared with the students three reasons why it would have been understandable if I quit:

1. Living with one of the most severe cases of hip dysplasia in the country. 23 years old and 12 surgeries. A glamorous total hip replacement. The man I loved speaking belittling and hurtful things about my hip on his way out of my life.
2. The loss of all three of my grandparents within a six-month period. No peaceful passing’s. Receiving the phone calls alone. Passing out at my Grandmother’s funeral only one week post surgery.
3. The text message that sent my world spiraling. Yes, it was the perfect proposal. Yes, he gave me his wedding vows. Yes, he reaffirmed his love. Yes, the man I loved with my whole heart lied to me, betrayed me and rejected me, claiming he had not loved me for over a year. 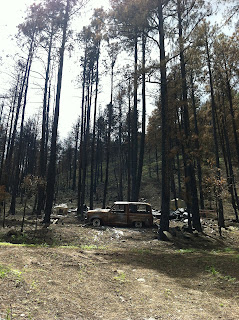 But, I believe what Isaiah 43:1-2 says,  “Do not fear! I have redeemed you. I have called you by name, you are mine. When you pass through the waters, I will be with you; and the waves will not overtake you. When you walk through the fire, you won’t be burned.”

I like to pick up in Psalm 66:12, “…we went through water and through fire; yet you have brought us out to a place of abundance.” Praise the Lord for that!  Fire is painful and powerful, yet it refines. It warms. It heals. It provides life. It draws people close. It is beautiful to look at.

Areas of my life have been charred and burned to the ground, yet I hope as you have watched my fire, you have begun to see new growth spring forth from the rubble.

I asked the students I spoke to if they have ever experienced a loss or trial that caused them to feel like their world was on fire. Everyone raised their hand. We all have experienced the pain of this world. Thank the Lord it is only temporary!

Regardless of how your world was set on fire, people are watching it burn. It could be an out-of-nowhere lightning strike, a firework gone wrong, a car spark, or a cigarette butt tossed out the window. Others watch, they take note, and they draw conclusions about your faith, family, etc. Call it judging, but it’s the truth, is it not? We care about others and watch how they react to trials and tragedies.

I have known people who were diagnosed with life-threatening cancer be healed. However, they walk away from the trial unchanged. No testimony, no ministry. Instead they pretend that part of their life never existed, living in fear that the symptoms will return.

In addition, I have known others who had cancer claim their life, but they left a testimony and legacy far more beautiful and inspiring than the person who was healed! They allowed God to use them as a vessel of hope to others who were experiencing the same suffering. There was beauty in their fire.

This week I shared my testimony – gave people the fire update. Reliving the story, trying to talk past the still-raw emotions is hard… truth be told, after my last speaking engagement of the week, I came home and bawled my eyes out in my mother’s arms. The pain is still real – the fire is still hot. But, each time you or I share our testimony, we overcome.

Whatever fire you may be experiencing in your life, don’t quit. Trust that God will bring something beautiful from the ashes. (Isaiah 61:3) Share your fire with others… sitting on it will just burn your butt. Let other people see the beauty in your flames.
Posted by Unknown at 12:55 PM