Die to Sin... a Lesson Seven Years in Coming

Well, February was a crazy month! I haven't had the time to write as much as I'd like! 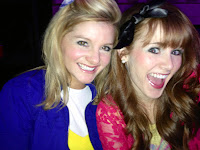 For two weeks of the month, I was on the road with our Secret Keeper Girl ministry. We had six shows spread out through Florida, Georgia and Alabama, speaking to approximately 5,000 moms and daughters. We watched over 150 precious ones give their hearts to Jesus! (Friends and family, keep your eyes peeled and ears open - Secret Keeper Girl will be in Texas and NM April/May! Looking forward to seeing many of you!)

This tour was extra special to me. I was blessed to be on stage with my dear friend, Kelci. She and I met three years ago competing in the Miss New Mexico Pageant together. Many God-events brought the two of us back together about a year ago. While visiting NM over the holidays we met for coffee. She was frustrated about where she was and felt God calling her somewhere new… I half-jokingly told her she should join me in Pennsylvania. And, here she is!

False eyelashes, butt-glue, extra padding, fake-tans, autographs, earthy crowns. We have both traded all of that junk in for excessively bright, ultra-modest clothing (a tutu for me!) and a Heavenly crown. It has been amazing to be on stage with my best friend each night. God’s redemptive work is powerful! 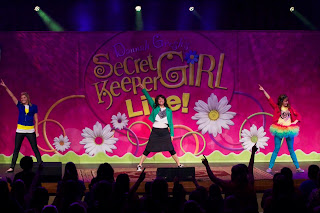 Now for the lesson… this one has been a loonnnnggg time coming. Seven years to be exact:

Come with me to February of 2006. I was a sophomore in high school. Life was going swell! Little did I know, a chain-reaction of tragedy was fixing to be triggered in my young life.

My wirehair terrier, Taffy Dill, was spunky, sassy, opinionated, fiery… she was very clearly my dog.  Knowing my father’s love for Dobermans, my mom found Shadow at the Humane Society. She had been badly abused as a puppy and was in desperate need of a safe haven. Shadow had been in our family for a couple of years, healing, trusting and loving on us. Then something changed.

Her temperament and demeanor became increasingly more defensive. She was distant. She quit trusting. Shadow attacked Taffy twice  - drawing blood both times. Thankfully we were always there to break up the fight. (Being my dog, although a fraction of the Doberman’s size, she would have fought to the death.)

At this time, we also had a pet rabbit named Sam. My mother had him litter box trained… Oh yes. (She would!) Sammy would often snuggle on Mom’s lap at night while we all lounged on the couch. I tried to tell her many times that Sam was not a cat but she never seemed to get the message.

Extra care was always taken to make sure the dogs remained in their separate back yard whenever Sammy went out to explore and get exercise. Unattended for a moment, Sam began to explore just a bit too close to the fence. Within reach, Shadow attacked. Sam lost. (My mom has some incredibly amazing spiritual insight on this story – if you’re curious, please ask her to share.)

We cried, mourning the death of Sam as well as the frightening shift in Shadow. She wasn’t the same again. We took her to the vet. He declared her not mentally stable. Years of abuse had taken its toll, as well as the taste of blood. The doctor advised us to put her down. Next time she could turn on one of us – she could hurt a child.

She was young and we knew how sweet and gentle she could be. We couldn’t bare to see her put down. We prayed and trusted it was all going to be ok. It wasn’t ok. Only weeks later my Mom and I returned to the house late in the afternoon from a school function. She went to the backyard to get the dogs and let them in the house.

I heard only a scream and then crying. Immediately I jumped up to the window that overlooked the yard… the image is scarred into my mind. I will spare you the painful details. My Taffy had been attacked by the Doberman. She fought to the death. Fur littered the backyard – her body mangled. I collapsed into a heap – uncontrollable sobbing and outrageous anger followed. 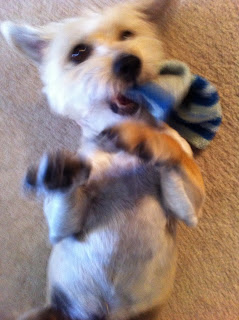 From there, the whole thing was a blur… For years I have grieved and resented what happened. Even dealing with anger towards my mom for “letting it happen.” (She knows this and we have forgiven and healed through it!) Taffy and I couldn’t be separated – except when she was offered a jerky treat by someone else! I lost my best friend… and to think it all could have been avoided had we put Shadow down when we were told.

This was certainly one of those things in life that makes you stop and ask, “Why, God?” Not to mention that last February – to the day of the dog’s accident – was the day my fiancé called off our engagement through a text. Another reason for me to stop and ask (no, scream) “WHY GOD?”

For years I had asked why Taffy had to die like that….  This week I finally heard an answer. Seven years later.

Shadow, the Doberman, is a picture of sin. Although abuse and neglect was a thing of her past and she had a loving home and people who took special care of her, that old nature would still manifest itself from time to time. She wasn’t fully healed. Nothing she or my family could do would completely erase the things of the past. So, they would rear their ugly heads.

Not only did it ultimately cost her life, (we did put her down after that happened) it cost the life of others she loved – her playmates – her friends.

Romans 8:13b says, “But if through the power of the Spirit you put to death the deeds of your sinful nature, you will live.”

Would Taffy have died if we listened to the vet’s advice? Probably not. Our sinful nature must die. Die completely. We can not allow our sins – especially those deep, dark, secret, nasty ones – to remain buried. Their ugly heads will be exposed. It may cost you the trust and relationship of a dear loved one. It may ultimately cost you your life.

I do not know what that sin is for you - I know mine! Do some heart-searching. Maybe yours is gossiping. Maybe pornography or other sexual sin. Maybe it is fear. We are told 365 times in the Bible, "Do not fear." Does that Do Not command carry with it any less weight than, "Do not murder?" No. We have to kill it all. To be Holy as HE is Holy. Blameless. Without spot or wrinkle. His blood covers us so we do not have to spill our own. But, we must be willing to let sin die.

As painful as it may be, we are told to confess our sins one to another that we might be healed. (James 5:16) Even if we appear ok on the outside – as Shadow did for many years – we cannot be healed until we are able to lay it ALL before the feet of Jesus.

Well then, should we just keep on sinning and sinning so that God can keep showing us more and more of his wonderful grace? NO! Of course not! Since we died to sin, how can we continue to live in it? We can’t! It’s impossible! We know that our old, nasty, sin-selves were crucified with Christ so that sin would lose its power in our lives. We are NOT slaves to sin. For when we died with Christ we were set free from the power of sin. Sin is powerless over us.  You must consider yourselves dead to the power of sin and alive to God through Christ Jesus. You can’t let sin control the way you live; do not give in to those shallow, sinful desires. Do not let any part of your body become an instrument of evil to serve sin. Keep your whole self, holy. Give yourselves completely to God, for you were dead, but now you have a new life. So use your whole body – your everything - as an instrument to do what is right and pleasing for the glory of God. Be unshackled. You aren’t a slave. Sin is no longer your master, for you no longer live under the requirements of the law. Wake up! You live under the freedom of God’s grace.
Romans 6: 1…-14 (the HMB version) 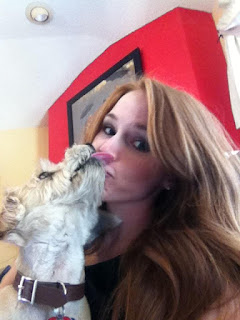 A wave of emotions flooded my heart and spirit as the Lord shared this revelation with me after seven long years of asking. I was convicted and motivated to see to it that I do what the Vet instructs and put down my sinful nature – all of it.
We hung on to Shadow with the hope that she could change… it cost all of us. A terrible and unfortunate accident, but I can attest that the spiritual lessons my family has learned from it certainly covers the sacrifice.
Grace is one of my favorite words. Without it, God had every right to “put me down” on day one… He didn’t. He loves me and knows what I am capable of being. It is much easier to make the choice to die to self before it costs you…

I apologize if this was a morbid or confusing post! To leave you on a happy note, I am pleased to tell you that God gave me Jackson. HE always restores that which was lost. Jack is my four-legged best friend. He looks and acts just like my Taffy did. That sweet puppy saw me through many long nights and has chased me miles around the park. Mom and Dad are puppy sitting right now… I am coming for you soon, JJ!
Put sin to death before it kills you or someone you love.