Between Egypt and Canaan


Adventures in Pennsylvania this week:

Took the boat out with my host family this past weekend. It is 75 degrees with a breeze off the water. I wore sweats – they wore swimsuits. The girls begged me to jump in with them. I stuck my toe in the Arctic water and ice formed as soon as I drew it out! Well, maybe not quite, but I have come to the conclusion that these people are part polar bear. Certainly, I am from the desert!

There are many hills here. Again, I am from the flat plains of New Mexico. I do not know how to drive up a hill – especially from a stopped position. After a few instances of whiplash, I think I am getting the hang of it. It is quite comical for other drivers I am sure… Mine is the only bright yellow license plate in the city - CAUTION.

Driving to work in fog has been a new experience for me as well. When I awoke this week to see a blanket of white hiding the normally visible Penn State football stadium from my window, I was filled with excitement at the beautiful, new sight. However, as I backed my car out of the drive and started down the hill, new feelings set in. I had imagined that it would be like driving through a marshmallow cloud… (yes, I live in a fairytale world) but, it was not like that! The farther away I got from home, the denser the fog became. Soon I could only see the haze of the red taillights of the car in front of me. 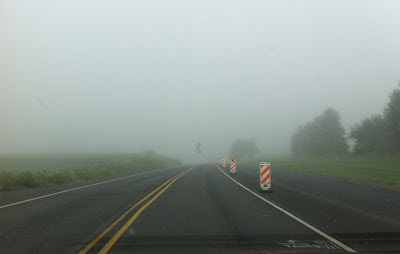 Now I am uncomfortable… I turned on to University (a mess with construction) and was alone on the road. I could only see about a hundred feet in front of me. The road narrowed and caution signs appeared to notify me of the merging traffic and redirected lanes. Oncoming cars were only visible a couple seconds before they passed me – and that was only if they had their headlights on.

Normally, my drives to school in Texas consisted of sunglasses and the visor down… My fists were clenched and sweaty by the time I pulled in the parking lot of the office, relieved that my driving was done. It was an experience I care not have again, however the locals informed me it will become a daily routine from now until the end of October.

Arriving at the office, my team settled in for a morning of prayer and mediation in the Word. As a ministry and as individuals, all of us are going through a season of change and transition. Led by the Lord, we turned to Numbers 13. (Thank you Dannah and Eileen)

In this Old Testament account, Moses sent scouts into the Promised Land to explore and check out the land that God was giving to Israel (v2). The land was just what God promised (23-24)! Note the giant grapes – so huge that two men had to carry a cluster on a pole held on their shoulders!! Those were some grapes! The men returned to Moses and declared, “It does flow with milk and honey! Here, look at the size of these grapes!” (HMB paraphrase 27). The promise of God had not only been fulfilled, it had been exceeded – the grapes were a bonus, a sign of His goodness and His promise to provide.

Verse 28 – That awful word is used here by some of the scouts… but the people are very large, but the walls are too thick, but it is strongly fortified. What?! Had God not just revealed His exceeding promise and faithfulness to them? Did He not just confirm His leading?!

We need more Caleb’s in this world.  In verse 30 he boldly and confidently ignores their but’s and says, “We need to go take possession of it.” Caleb knew that God had already given the land to the Israelites (v2). He took God at His word and knew there was nothing to be afraid of.

Yet, the people continued to complain and explain why they shouldn’t hold on to what God promised. …but we cant… v31.

I could imagine Caleb’s frustration. He looked upon the other scouts and the people and saw Warriors. Warriors capable of claiming what God promised. But, the people saw themselves as grasshoppers v33.

Chapter 14 is heartbreaking – the Israelites complain and weep to Moses and Aaron – they wished they were back in slavery in Egypt. Wow. I couldn’t imagine. True, in Egypt they had food and shelter, they knew what the future held and ultimately they knew they were protected in Egypt. Now, they were following an old man in circles through the desert. They lived in tents, hit rocks for water, lacked for food (enter manna), struggled for direction and longed for the “good old days.” At night I am sure through the thin walls of the tent they could hear the snoring of the fat guy next door and the incessant crying of a baby down the way. They were not living in the lap of luxury… they were living in limbo between Egypt and the Promised Land.

That’s where I am. Often, I am tempted to look back to Egypt: I was loved, beautiful, a bride, a teacher, the future was blossoming… But then catastrophe! (I know I still am those things in Him, but I would be lying if I said my confidence did not just take a direct hit) God said, “Heather, I want to use your pain to develop a ministry in which other girls will find healing.” Selfishly, I don’t want to help other girls find healing right now!! I want to have MY heart pieced back together, I want MY healing. The Lord is working out my selfish, toddler-like attitude... I am in time out a lot!  I am “living in a tent” between Egypt and my Promise, aware that I need to be careful about not looking back with longing for Egypt when God clearly took me out of there.

I think sometimes God enjoys watching us in limbo! We seems to say "Daddy.." much more.

Back to my foggy car ride to work… sometimes God allows the fog of uncertainty to cloud our view. When objects are hidden from our sight, our faith (Hebrews 11) has an opportunity to grow. The Lord is in the car in front of us, promising to safely lead us to our destination in the land of Canaan. You may have to slow down a bit in the fog and keep extra watch on that oh-so-important yellow line, but you will be safe. Sometimes the “caution” signs that appear out of nowhere, are placed there by the enemy to scare or distract us… If God is driving the car in front of you, why bother look to the sides?

Rather than drive the car following His, sometimes it would be easier to just get out and lock myself in HIS trunk… but, then I have refused myself the opportunity to grow and to learn – and to be taught by God. Yes, Jesus could have wiped out all of giants in the land and allowed the Israelites to stroll on through, picking daises on the way. But, then we would not have the story of Caleb. The Lord wanted them to chose faith – to trust – to fight for the promises of God – to wait – to grow – to heal.

So, I will remain in my red sonata… slowly navigating through the fog of life. I will trust that God is driving the car in front of me, knowing that when the Son comes out, the haze will dissipate and I will be living in the fullness of the promise of God.

If you are driving in a cloud and it’s not quite the marshmallow fantasy you dreamed it would be, I pray for you the courage of Caleb. The fog always lifts (although some days I wonder)! Slow down, don’t be overwhelmed by the lack of visibility; God may be shielding your eyes from something dangerous or hurtful. Keep your eyes locked on His red taillights. This is where you have the great privilege of developing the faith.

May you and I both be able to say, “We should go take possession of the promise.”
Posted by Unknown at 10:30 AM