It's OK to Sit on the Bench

First,  I LOVE THE SOUTHWEST! I attended a high school homecoming football game here in PA this weekend. Lets just say I had no clue it was homecoming until they announced the queen candidates. No mums. (They had never even heard of them... try explaining that to a Yankee!) No stadium decor. No court in dresses or crowns. It was very different! I'm thankful for my over-the-top football and homecoming experiences! 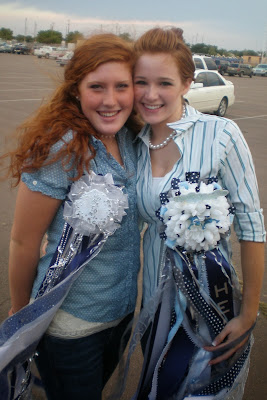 (High school throwback with BFF Haley - Yankee friends, these are mums...
ours are small and conservative in comparison to some crazy Texas schools!)

Now, for the lesson I learned this week about football.

A football team: 11 men on the field working and moving as one unit. The team is notorious for their sportsmanship, integrity and wins. While many players contribute to the success of the team, the quarterback is typically the stand-out responsible for the team's wins and losses. Every offensive play, he's touching the ball. He leads the offense, calls plays, takes sacks and runs up the middle when necessary.

Playing the perfect game and in a position to win, a flash comes across the line of scrimmage. No one saw him coming. Just like that the QB is on his back. He struggles to get up. When he finally gets to his feet, he realizes his arm is broken. Not a little break - it's obviously mangled. Call it pride, determination, responsibility, etc. He won't get off the field. He's determined to finish the game as if nothing is wrong. (Unless you're Tim Tebow who played the 2nd half of a football game with a broken fibula in high school, a broken non-throwing hand as a Gator, and broken ribs in the NFL as a Jet... the rest of us probably wouldn't/ couldn't do it!) 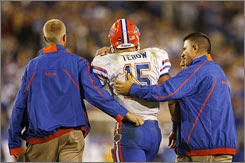 The injured QB is now not as effective in his role as he was prior to the injury. He's requiring his offensive line to work even harder to protect his vulnerability. While some may view him as a hero who pushes on regardless, others are thinking that he is crazy and prideful for not coming off the field and receiving the medical attention necessary. If the coach found out, he would likely require the QB to come off and get attention on the bench. Is it wise to keep going? Would it not be better to switch places with the backup and go back in when you're healed and ready?

I was determined to keep going. A year and a half ago, seemingly out of no where, I was tackled to the ground and instantly knew I was severely injured. I quickly got to my feet to continue... I've pretended like it's fine. I have kept going - kept playing my game - hiding the injury from those who questioned if I was alright. Only a few people very close to me know the severity of my condition. I will say from my own experience, it isn't wise. It would have been easier to come off the field initially. I believe that in my determination and perseverance to keep going that I'v caused others to be injured as a result of my unwillingness to relent. I have fooled a lot of people, but not The Coach.


When you don't volunteer to take yourself out of the game,
He is more than capable of pulling you to the bench.

I've finally come to a place where I recognize I can't keep playing the same game I have been. I need to come off the field. The Coach saw I needed to come off some time ago...

The last three years have contained a lot challenges. Three deaths, two surgeries (still in physical therapy on a weekly basis), broken engagement, loss of the future as I knew it, family health issues, adjusting to a cross-country move... I still struggle deeply to trust. I can hardly talk to a guy without shaking. The thought of any close relationship frightens me. Trying to make friends is something I dread. I can't possibly let someone else into my life again! I've built walls around my heart so high - and I've been successful in shutting well-meaning people out. Including you.

A few weeks ago, a piece of news finally did me in. For the first time in nearly three years, I accepted the fact that I am not ok. I'm not fine. I genuinely felt. It has been a long time since I allowed myself to feel. It hurt. I let the tears come. I laid down in the arms of grace.

He placed me into the hands of people who were qualified to tend to the now-infected wound. Through another person, wisdom informed me that I was struggling with anger. She suggested I needed to first deal with the anger before I could pursue healing. After some convincing, I agreed to vent my "anger issues" by going plate smashing. Armed with a baseball bat and some Goodwill china, I went to work. Initially, I felt like an idiot. This was going to help nothing!

Then something finally broke. Much needed - long overdue. I broke plates and smashed through a piece of plywood for over an hour and a half. My brain was numb and lightheaded - no particular issue on my mind - just a release of built-up energy. My body became exhausted and my hand was dripping with blood from the burn of the baseball bat. Physically exhausted and tears running down my face, I took the last plate to the foot of the cross. With one Mulan-type swing and yell, I smashed the plate to pieces and collapsed onto the ground at the foot of the cross. The Coach finally had my attention. I was on His bench where He's wanted me all along. I laid there and cried - accepting my brokenness. I saw myself in the pieces of the broken plate on the ground. I let Him minister healing. It was beautiful. It was freeing. It was broken and still stunning. 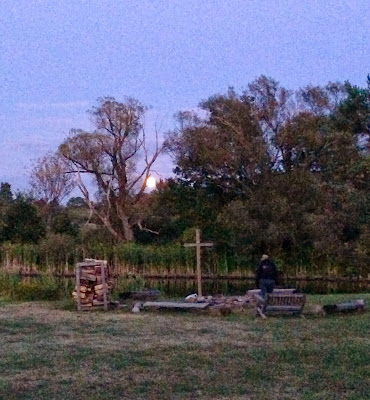 Dealing with chronic pain and surgeries my whole life has caused me to become excessively tough. Many of you have prayed for me and have blessed my family and I with words of encouragement when we were facing yet another procedure. For that I'm exceedingly blessed. To cope with pain, I've had to force myself to get out of bed. You really do have to learn how to block the pain and the mental struggle or else you couldn't function. Those who have chronic pain know what I'm talking about! I've gotten very good at it.

This is an effective strategy when you're dealing with physical pain. Not so much when your heart and emotions are what's injured. Trying to block it and keep going is very harmful to one's health, relationships, spiritual wellbeing and purpose.

In the last two weeks I have learned,

it is OK to sit on the bench.

The bench is not a sign of weakness or not being "qualified" or "good enough." On the bench, The Coach can have our full attention. We can learn new strategies. Observe team dynamics. Assess areas of personal improvement. Receive correction as well as encouragement. The time on the bench allows the injury to heal. Healing would never come to a QB with a broken arm if he kept trying to take sacks each week.

Psalm 23 says, "He makes me lie down in green pastures." Makes. He doesn't suggest. He doesn't ask. He doesn't request. He can make us lie down. He needed to get me to sit on the bench so He might have my full attention.

So, I'm not putting on a mask anymore. I'm not going to continue intentionally building my wall. For the first time in my life I'm not So-and-So's daughter, not his girlfriend or his fiancé. I am Heather. I'm learning what that really means. Like in the movie Runaway Bride, I'm learning what kind of eggs I really like. No, I am not ok. I've been so consumed with being tough and pleasing people - not wanting anyone to think I'm weak. I've been the injured QB on the field everyone is raising an eyebrow at.

So, I'm on the bench. No more facades. I'm hurt and I will go back in when The Coach sees fit. Until then, I'm on the sideline. I'm learning, healing and growing. I am sorry for pretending... It would have been better to let you see my weakness and receive your help and encouragment rather than faking my way past you. Please forgive my pride.

Maybe your life has been one trial after the other. Maybe you're in a place of loneliness or depression. Maybe you've refused to acknowledge your injury. Are you wondering how on earth you got to this place and what you might possibly do next to fix it? I'm begging you to lie down in green pastures willingly. Take a clue! Don't have Him make you. There is nothing wrong with lying down. No shame in saying I'm not ok/I need help.

Building a wall, shutting people out, trying to keep playing on your own - those things only hurt the team. They no longer allow you to work together as one. We are called to live in community. To bear one another's burdens. To rejoice with those who celebrate and mourn with those who hurt. Let people do that for you. Besides, pride and self-sufficiency only sadden The Coach and make Him question your ability to be a team player.

Come sit on the bench. Accept rest. Receive healing. Don't try to be tough. You have nothing to prove. We are all weak - helpless - messy - ugly causes if it were not for the love and grace of Jesus Christ our Lord.

Trust The Coach. You don't know... He may need to pull you out so you're ready to go in to an even bigger and better game. In the mean time, It's OK to Sit on the Bench. Join me.